The first thing I figured out was the distinction between Bluetooth and Bluetooth Low Energy. Bluetooth Low Energy (sometimes referred to as Bluetooth 4.0) is a version of Bluetooth that uses less energy that prior versions. This is particularly advantageous for Internet of Things devices because it means they can run off battery for long periods of time. I can confirm this. I was pretty surprised by the number of uses that I could get out of my vibrator after a single full charge. This “low energy” distinction is a result of BLE modules remaining in “sleep mode” when not in use and thus using less energy. You can read a bit more about the differences at this link.

I decided to look around and see if there were any other articles written about reverse engineering Internet of Things devices and chanced upon this post. In the post, the author reverse engineers a smart light bulb. At this point, I don’t have the knowledge to brag, but I get the sense that what I’m trying to do might be a bit more difficult. For one, while an app that controls the color of light bulb only need to modify the color presented by the LED, a vibrator consists of several motors that sometimes need to be activated in tandem. Despite this, the post gave me some pretty good insights into BLE devices in general. 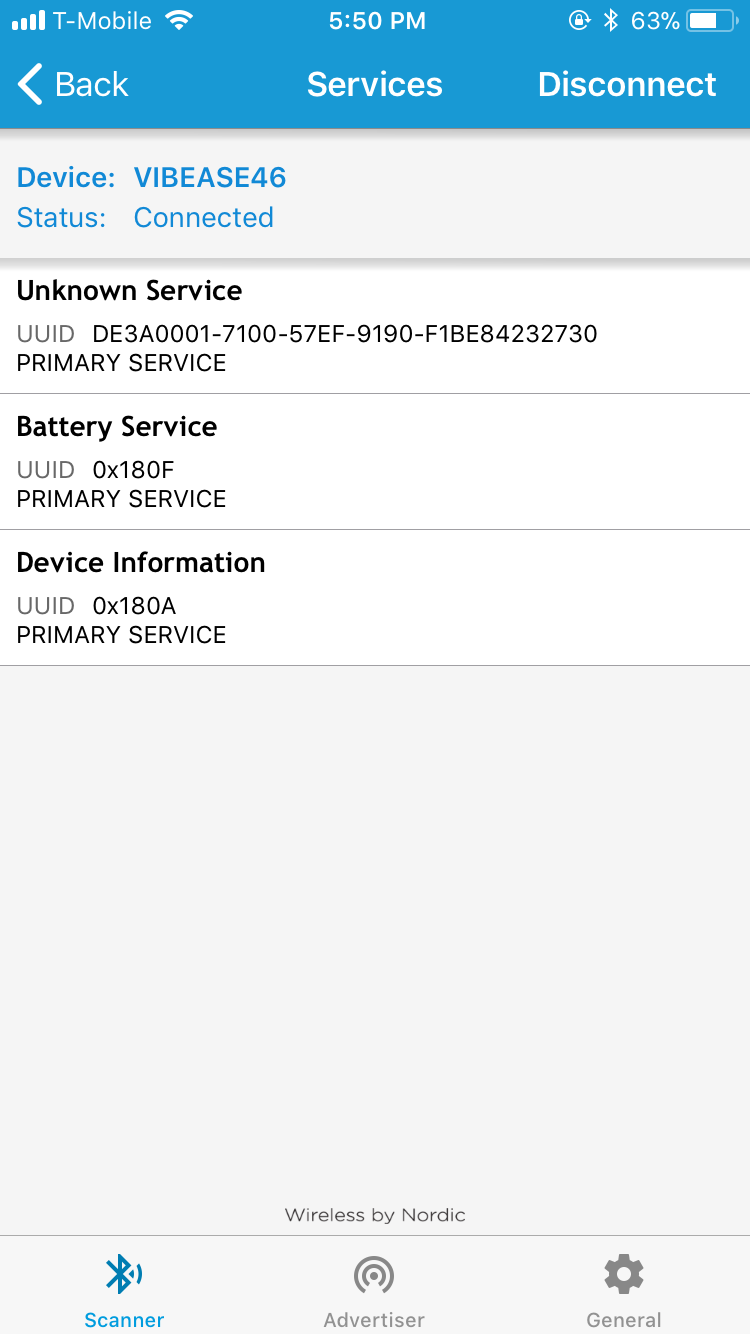 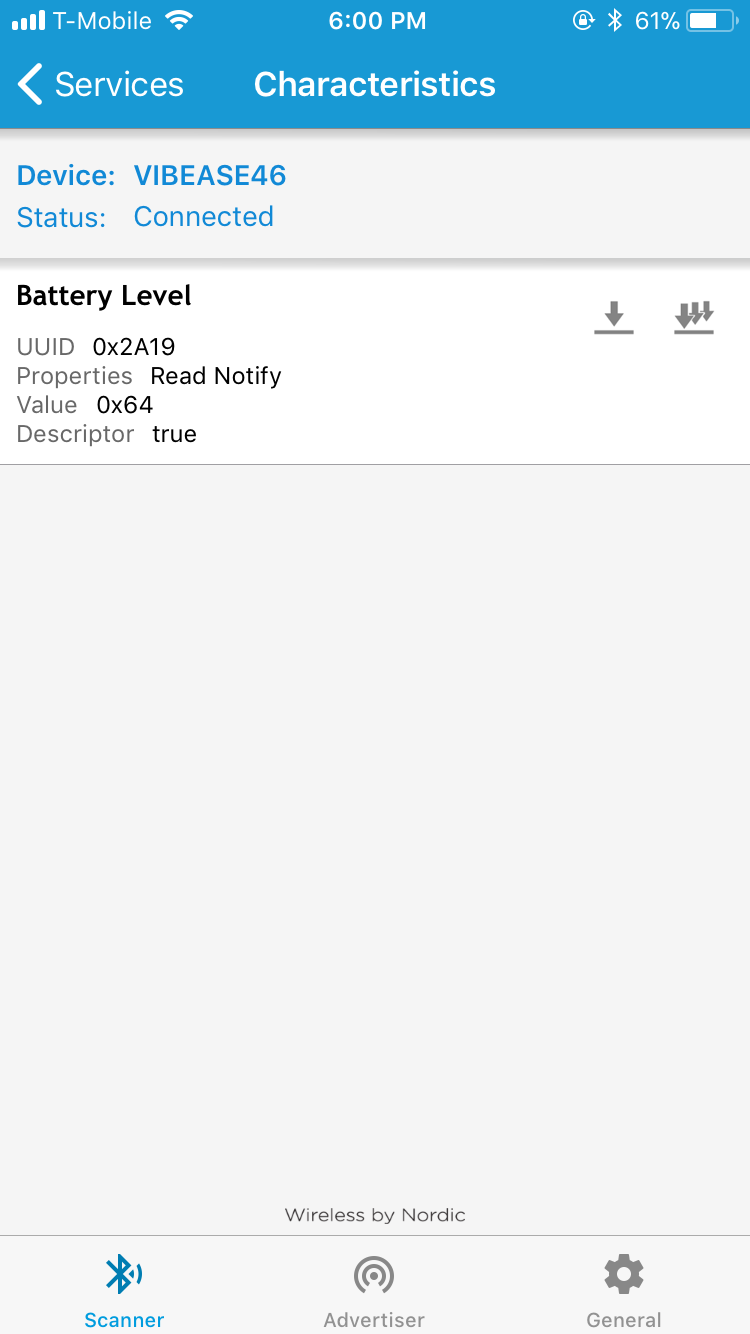 I navigated to the “Device Information” service and noticed that it had several “Read” characteristics that pertained to the Serial Number, Model Number, and other details of the device. Here’s a screenshot of what that screen looked like with certain details obfuscated. 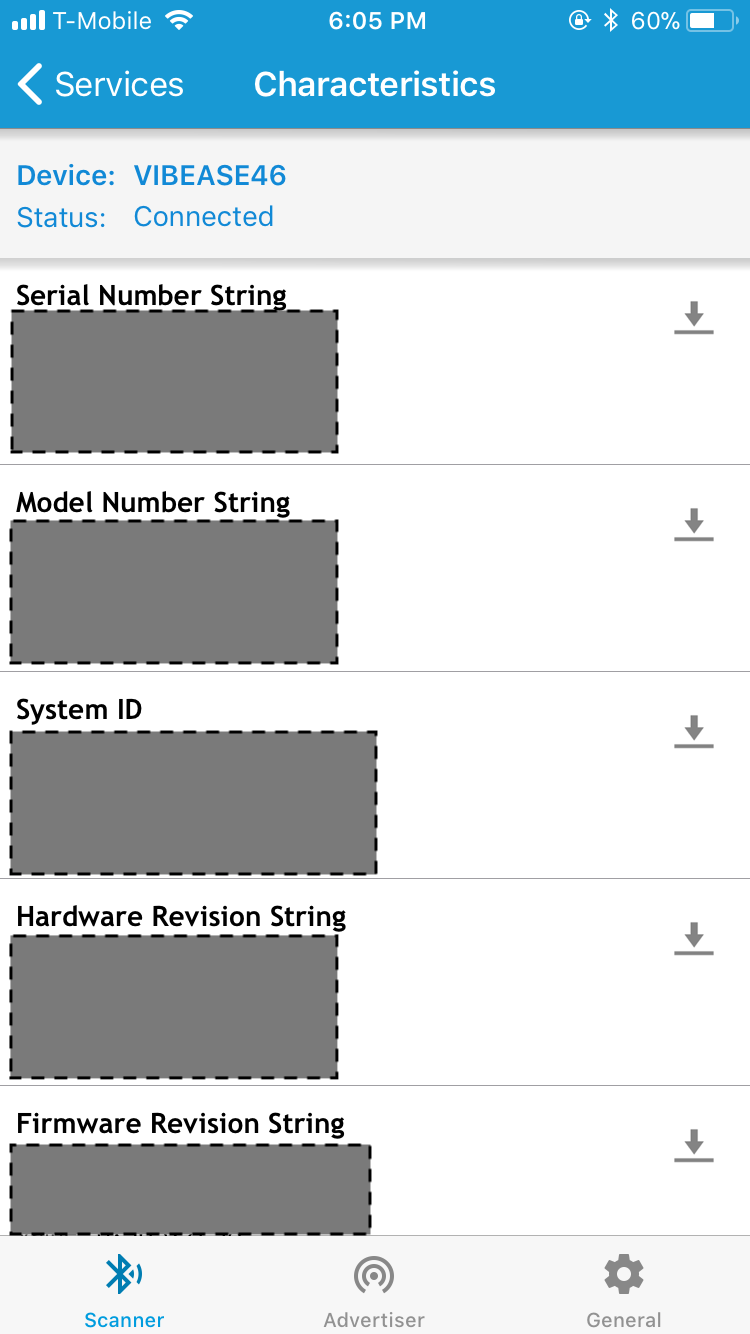 All this was fairly easy, but I still needed to figure out how the app interfaced with the motors. I navigated to the ominously named “Unknown Service” to see if I could figure anything out. 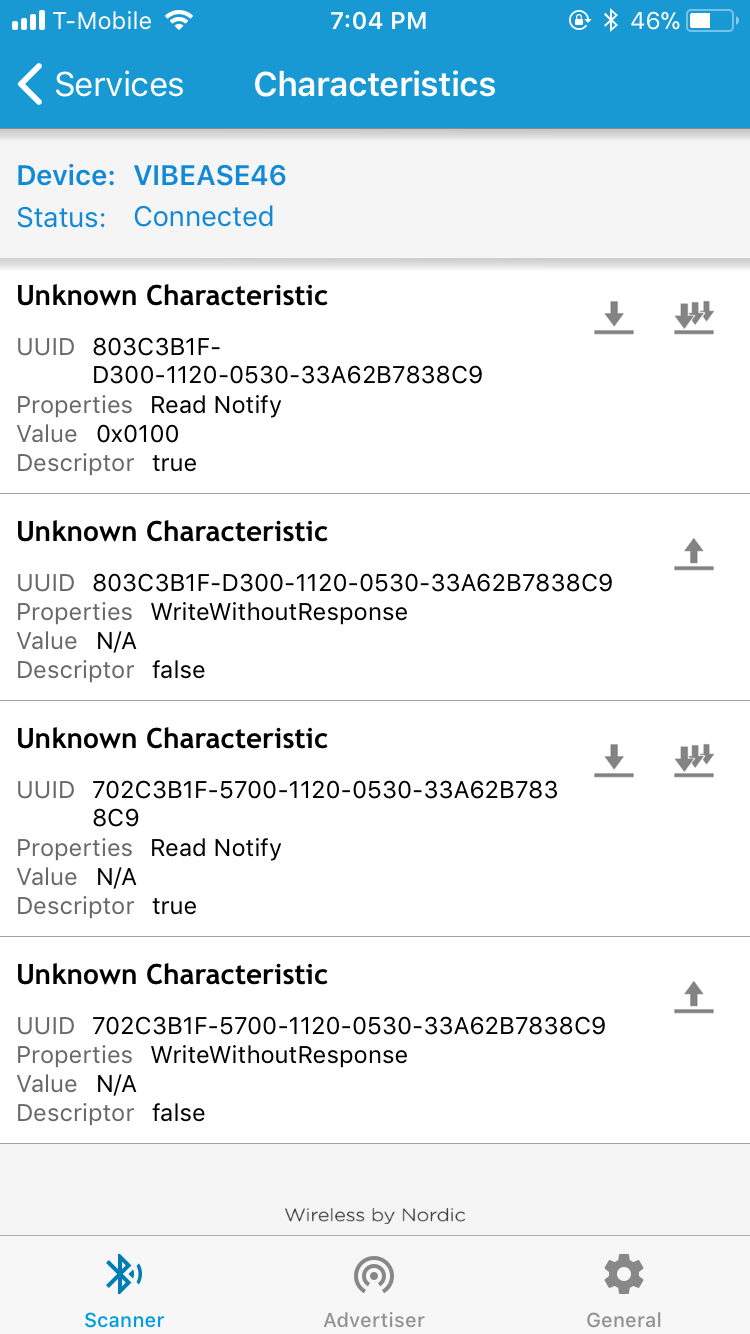 I noticed something a little strange with the two “Read Notify” characteristics that were associated with the motors. One characteristic read a value of ‘0x0000’ (The screen-capture above shows a value of ‘0x0100’ because I took it a while after I gathered the initial reading. I’m not sure why the value changed in the hour between me seeing it for the first time and me remembering to take the screenshot. More mysteries. Wow, this parenthetical is getting a little long…) which corresponded to a motor that was off (or, so I guess) and the other read a value of ‘N/A’. At that point in time, the vibrator was on but not vibrating, so I found it strange that one motor would send a zero value and the other would send a null value. I decided to do a quick Google to see if this was a common issue with characteristic on BLE devices but couldn’t come up with anything useful.

Side note: Effective Googling is very difficult when you are learning something new, so I might not be formulating my queries in a way that brings up good responses. If you know something about BLE and why this might be happening, do let me know!

Anyways, I noticed that the NRF Connect app provided an option to write to characteristics that were writable. At this point, I did what any good engineer would do, I tested out random values. I tried sending ‘0x64’ which corresponded with the decimal value 100 to see if the characteristic was setting the power level on the motor. No dice! 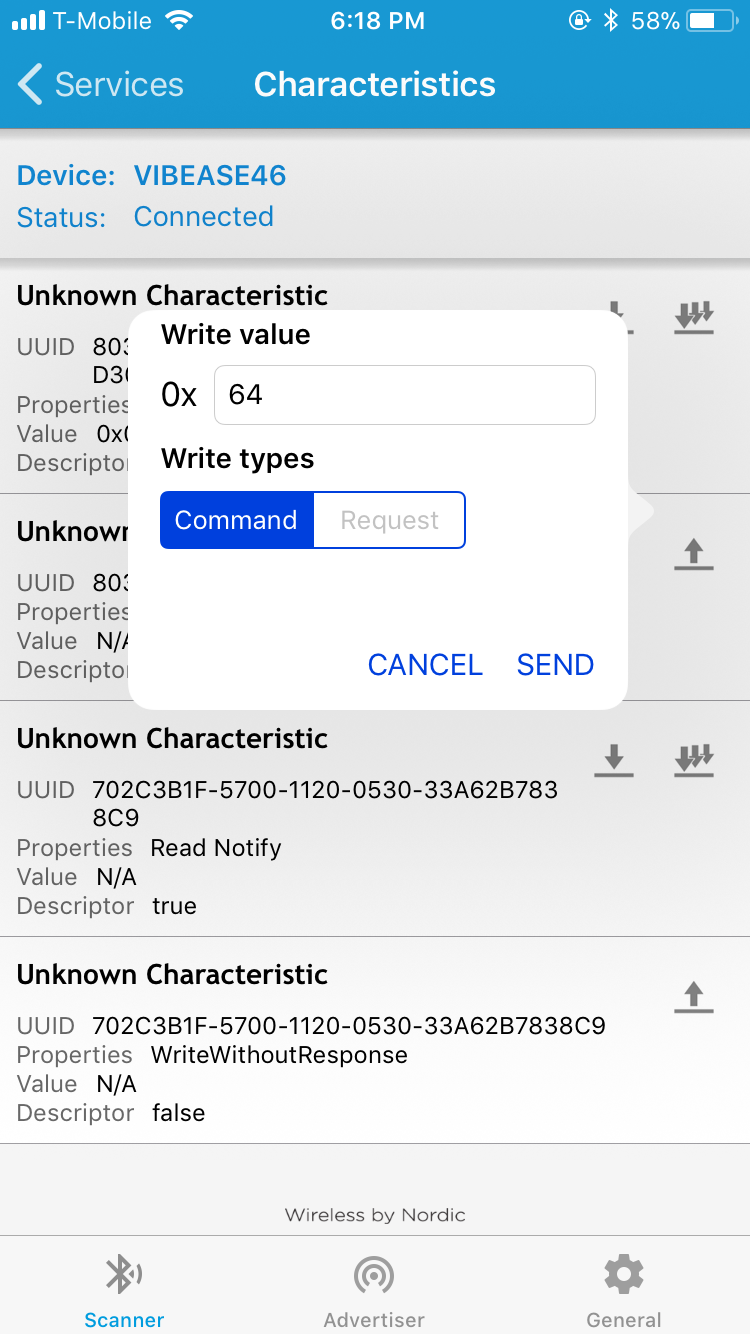 I noticed that the zero value being read by one of the characteristics was a hex number with 4 places, so I tried sending ‘0xffff’ but that didn’t work either. Bother! 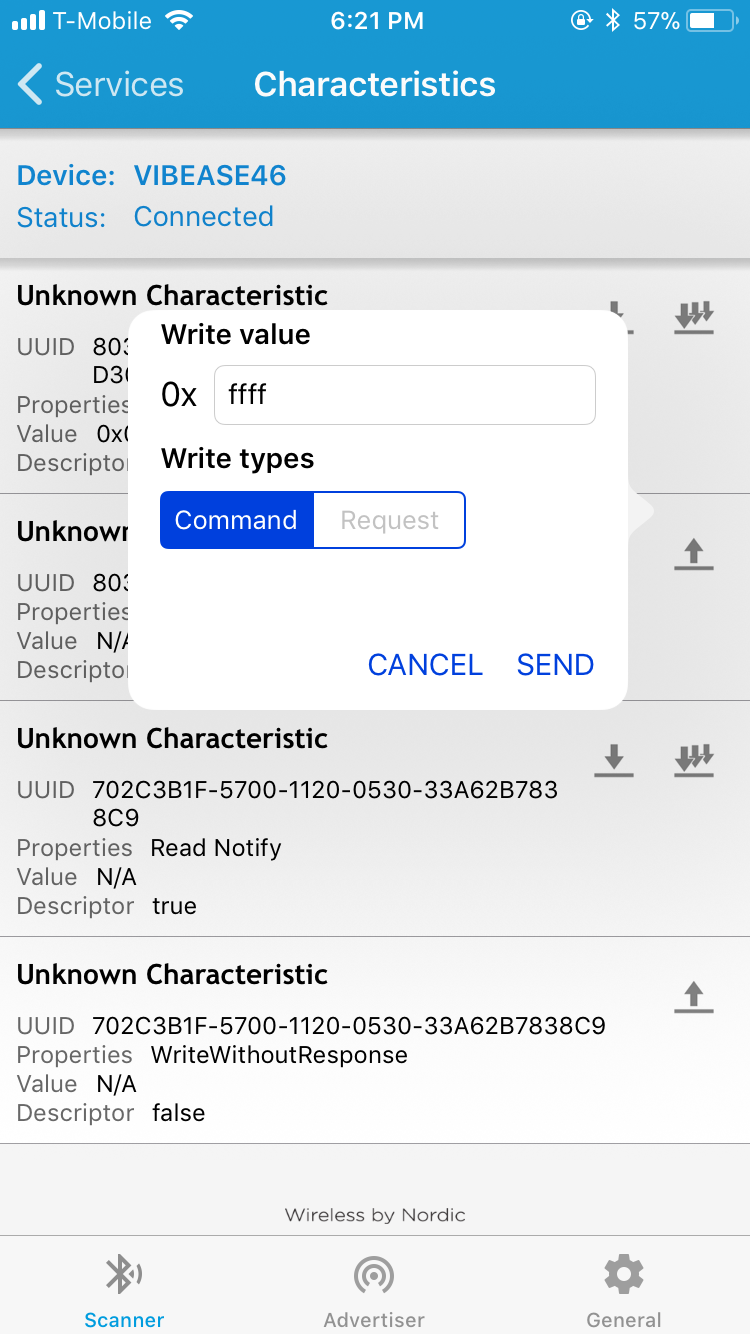 I decided to see if there were any Bluetooth sniffers for iOS. I wanted something that could run in the background and log all the messages sent over BLE from my phone. Knowing Apple’s focus on security, I figured that an app like this might not be available on an un-jailbroken iPhone but I tried my luck on it anyways. Some Googling led me to this StackOverflow post that provided some details about running Bluetooth in “Diagnostics Mode” on iOS. I wasn’t sure what kind of information I would be able to get out of the logs provided by Apple but I figured it was worth a shot. I ended up following the official instructions for Bluetooth logging on iOS linked to in the StackOverflow post to generate my log.

Side-note: What is it with Apple and all the outrageous key/button combinations they make you press to access diagnostic features on their products? I mean, I understand why they make it difficult for users to get to those features but geez I’m going to get arthritis by the end of all this!

The result of this diagnostic logging was a ’.tar.gz’ file located at the directory specified in the instructions referenced above. I unzipped the directory and discovered that it consisted of several diagnostics files. 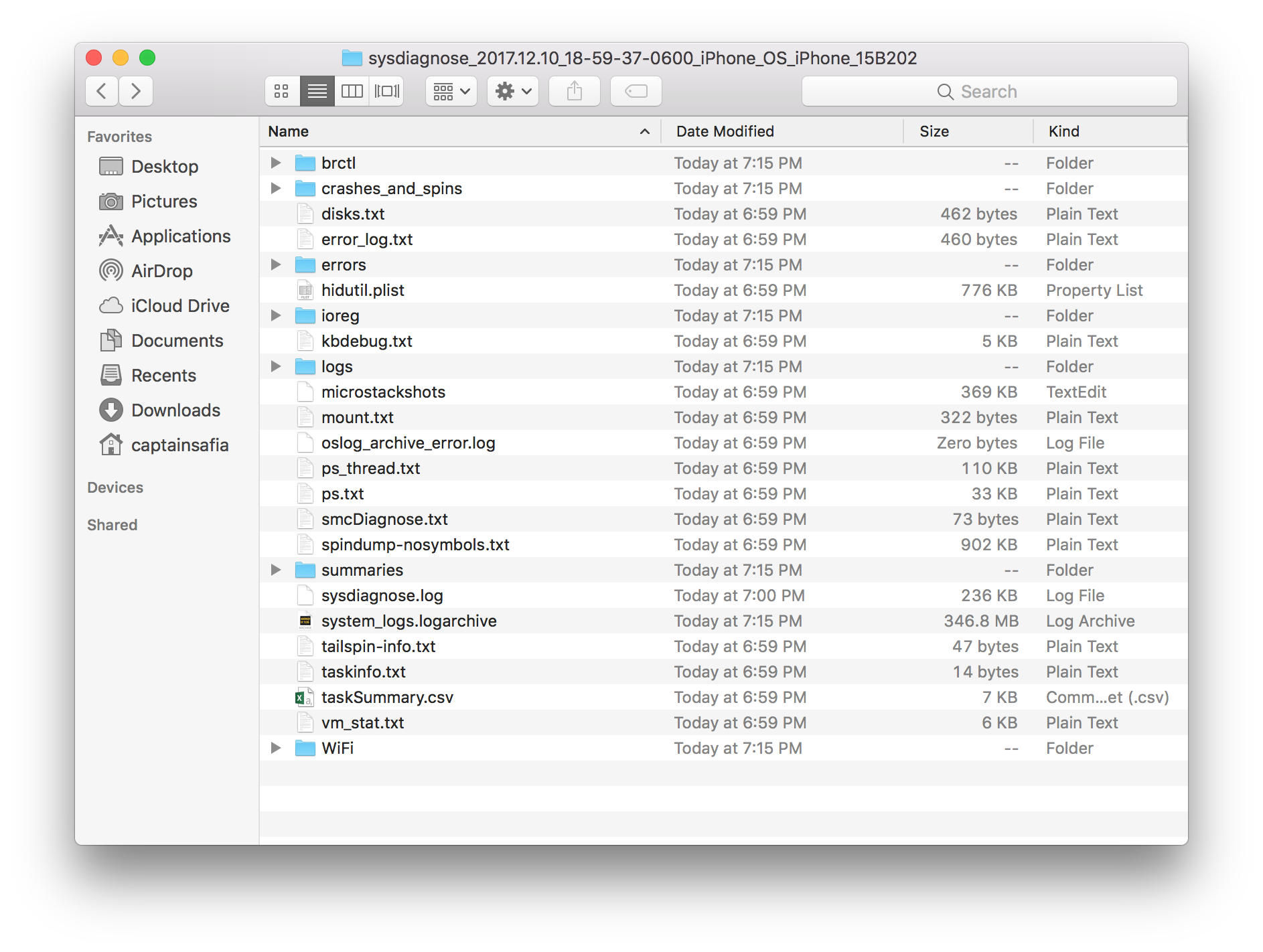 Oh boy, what did I get myself into now? At this point, I decided to utilize one of the most time-tested and expert-recommended problem solving techniques. It is called “click a bunch, read a bunch” and consists of opening and reading lots of files until you find one that makes sense.

I found a few files that seemed to be related to Bluetooth logging but opening them in Wireshark rendered some truly nonsensical data. 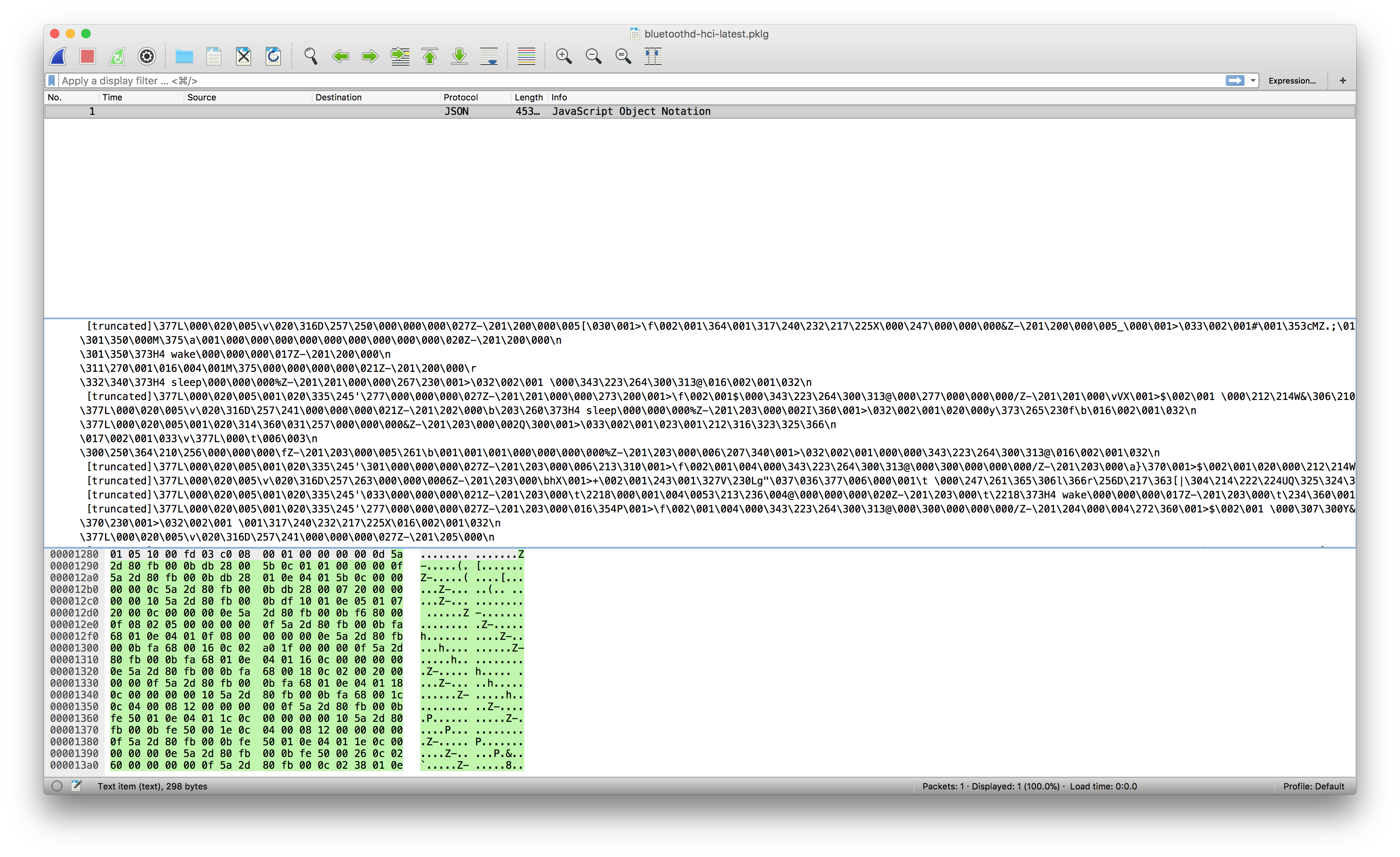 At this point, I’ve tried enough options to go back to the drawing board one more time. From doing some research, I discovered that sniffing BLE signals and getting a log that is fairly easy to parse in Wireshark was pretty trivial in Android. It felt like the Apple ecosystem was really limiting me here, then again I am new to this and might just be unaware of the right tools to use. I did some more Googling to see if there were any other Bluetooth sniffers available for iOS or Mac but didn’t run into anything. Most solutions recommended purchasing a device like the Ubertooth One, which is designed to help with Bluetooth experimentation. But this device has quite a hefty price tag. It retails for anywhere from 120 USD to 200 USD, a little out of my college student budget. I couldn’t find a way to sniff BLE signals on iOS from the phone the way it was done in Android.

I figure I would pause this little experiment here and post this blog post as is. If you consider yourself an expert in the Internet of Things and have some advice on how I should move forward, do let me know.