The Definitive Story of How I Got Into Tech

I often get asked how I got into tech. And I often have a different answer every time I am asked. The truth is, technology has been such an integral part of my life that I can’t distinguish when I really got into tech. After my recent (and first of many, hopefully) podcast interview with Renee for the Becoming A Data Scientist podcast, I figured I should dig deep into the cobwebs of my memory and write the definitive story of how I got into tech. Ready? Here goes.

My earliest memories of computers involve playing with flash games on websites like Miniclip and Barbie.com, because that’s what we did back in the day kids (ha!), I would say my absolute, earliest programming related endeavor was customizing my Neopets profile page. Neopets was an online game where you had magical pets that you were responsible for feeding, clothing, and other things one would expect to do with their online pet. In addition to that, users had a profile page where they could show off the status of their pets and their accomplishments within the game. Now, there happened to be a contest amongst the kids back then to see who could pimp out their profile page the most. Most just installed free themes from providers, but me? No sir-ee. I figured out this thing called HTML and CSS and did enough on my profile page to add glittery pink marquee pictures EVERYWHERE! Although HTML and CSS are technically not programming languages, one could consider this to be my earliest experience with code.

When I was around 11 years old, I got really interested in Photoshop, specifically image manipulation. I found tutorials online that would show you how to take an assortment of different pictures and create a single scene. For example, you could take a picture of a woman on her bed, a forest backdrop, a butterfly and create an image of a fairy in a forest. I thought that was the shit! But Photoshop was expensive and I was poor, so I started to try and figure out how to “hack” Photoshop to go past the 30-day trial limit. This involved browsing weird websites with .ru TLDs and other nefarious sections of the Internet. I messed with DLLs, registry files, and all kinds of of program configurations just so I could spend my days building awesome fantasy scenes.

I did this for about 2 years until the summer before high school. I was obsessed with documentaries at that point. There was an online website that provided free documentaries from the History and Discovery channel (back when they were good) and I would spend hours on the weekends and breaks watching documentaries about everything under the sun (but maybe too many about alien conspiracy theories). Then one fateful summer day, I watched a documentary series about the history of computing. It covered everything from the ENIAC to the PC and I fell in love. I had no idea that the thing I pressed keys on everyday had a story to it. That so many people who were just passionate and excited about what they did and they created a revolution. It was awesome! Now the final bit of the documentary series happened to be about the Internet in the early 2000s. It covered the emergence of Yahoo! and Microsoft and other big tech companies, but most importantly it covered the emergence of Google. Google was awesome. The documentary introduced PageRank a little bit and after reading about it a bit further, I was super excited. This was awesome stuff! Two guys, a computer, and their brain invented something that could change the world. Can you imagine what a girl and her computer could do?

So I Googled “easy ways to make computer programs” or something to that effect and ended up finding out about Python. I then looked up “books to learn Python” and as my lovely friends over at the Russian hacker forums would advise, added “PDF” to the end. I learned how to code in Python that summer. The first program I wrote was pretty basic. It allowed you to play a high-low guessing game to guess a number. Humble beginnings. 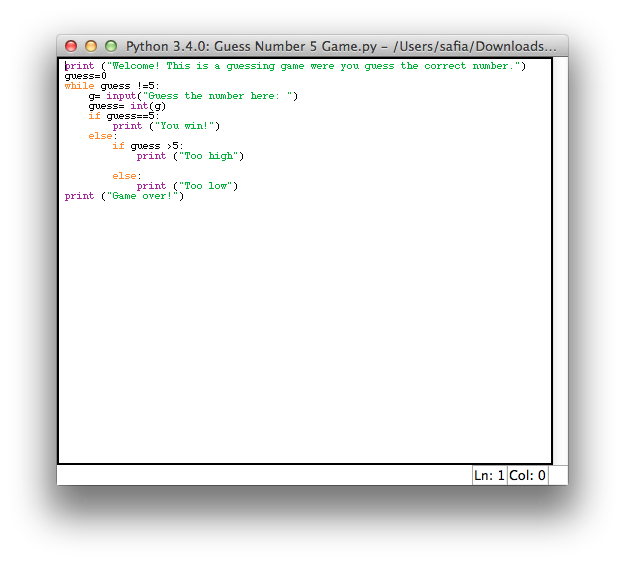 After I figured I had learned enough about programming, I picked up “Introduction to Information Retrieval” by Manning, Raghavan, and Schütze. I read about the art of building search engines and spent the summer of 2011 building a simple search engine in Python using Scrapy, MySQL, and my brain.

I played around with my search engine a little bit and then eventually got interested in the queries I was typing in. When I typed things into my search engine, the results weren’t very good. Why were Google’s better? Now it turns out that the answer to this was more complex than my 14-year-old brain could understand, but I reduced the problem. I figured it must have something to do with the words I typed in. I spent the fall of 2011 learning about natural language processing (NLP), playing with NLTK (Natural Langauge Toolkit) and dabbling in linguistics.

After I got bored of that, I started looking into other things in the area. I was on the Wikipedia page for NLP trying to look for related topics when I stumbled upon the machine learning page (OOOOH, SHINY!). Woah! This stuff was cool. Look at all these big words and this fancy math. It seems so hard. Oh hey, robots! Maybe I won’t get it. Hey, I can at least try. So I downloaded a ton of books ( cough cough ) and read and coded and read and coded and read and coded. I watched videos on YouTube of college lectures. I read tech blogs of companies I recently discovered. I did everything I could to learn as much as I could. Along the way, I found things I were fasicnated by and things I weren’t. I discovered nuances in the field. Something felt warm at the bottom of my heart. Did I find my passion?

At this point, I was at the end of my high school career and the interesting part of the story ends there. If you are interested in hearing the rest, feel free to reach out to me on Twitter and I’m glad to share.

To finish it off, I would like to thank all of the authors who put their material online for free. I probably couldn’t afford the number of books I downloaded illegally when I was learning, so free books were always a blessing.

I also apologize to that one huge tech publishing firm (you know who you are) that I cheated out of a couple hundred dollars by “downloading” your books. I’m glad to repay you by writing a book for you! :)

Throughout this journey, I truly stood on the shoulders of giants and I am glad to now know many of them personally. It’s been an awesome journey thus far and I am excited for the rest.

Thanks to my good friend Eric (@EricTendian) for reviewing this post.